Throughout the 20th century, America underwent rapid change, from horses and buggies, through two world wars, and finally to the arrival of the Internet. But Americans have always needed time for relaxation and recreation. This book describes how political, economic, and cultural events influenced the history and development of the leisure pursuits of Americans of different races and ethnic backgrounds during the 20th century.

Readers learn about the opening of Disney World and the ever-popular auto vacation, as well as the laws, acts, and organizations that allowed leisure time and activities to become a permanent fixture in American culture. Other topics include the significance of the Model T Ford, the development of the 40-hour work week, and the lure of reality television shows. Sections include:

1. The Progressive Era and Reformers
2. The War to End All Wars
3. Black Death to Black Tuesday
4. The Great Depression and the New Deal
5. The Good War and the Aftermath
6. Television, Teenagers, and Rock 'n Roll
7. The Jet Age and Turbulence
8. Yuppies, Star Wars, and MTV
9. Generation 'X,' the Internet, and Virtual Reality

Organized chronologically, this book is ideal for high school students, college students, and the general public. It identifies the most popular games, sports, and hobbies of social groups ranging from the working class to the wealthy, along with their importance in American history. Over 51 photos illustrate the different leisure pursuits in their time periods.

“This book is useful for all levels of learning, in both the classroom and in libraries.... a highly recommended resource for public and school libraries and for college and university collections. Fun and Games can also serve well as an accessible text for introductory college courses on recreation and leisure in America.”

“Arranged chronologically, this book covers an interesting aspect of American history. High school teachers will find in it a fine overview of how all aspects of American culture and history interrelate. Recommended.”

Click here to order the book from the publisher 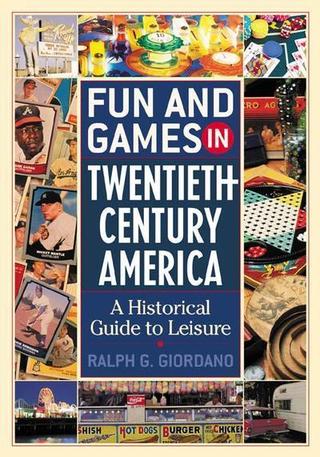