WorldCat Identity: 15 works in 47 publications in 2 languages and 2,888 library holdings.

"The board sent me their feedback on your WWI EQ essay. First,   I'd like to say it's one of the most well-researched essays I've seen for this database, and I appreciate your use of a diverse amount of print sources. Thank you again for contributing to our site! -- Rebecca Matheson, ABC-CLIO"

“Ralph is a smart, diligent, and quick-witted author who, in addition to his wonderful ideas, is completely open to suggestions. His friendly, easy-going attitude and speedy turnaround on projects made him extremely easy to work with, and made working at Scarecrow a pleasure.”
Renee Camus, editor.

“Thank you so very much for the copy of the book you sent to me. I was very touched by your dedication, to say the least -- Working with you and seeing your writing develop has certainly been one of the highlights of my career, and I'm so happy to have played a small part in your now-extensive publications list!” Debra L. Adams, Shoreline Writing Services, www.shorelinewriting.com

Ralph G. Giordano holds a license as a professional Registered Architect in the state of New York, a Master of Arts in Liberal Studies from the City University of New York-CUNY, and a Bachelor's Degree in Architecture from the New York Institute of Technology. Mr. Giordano is a member of the Author's Guild who has published eight  books. He also edited a series "The American Dance Floor" for ABC-Clio, and has an additional book translated into French:

In another publication he contributed three historical essays in:
• Historical Dictionary of the Gilded Age (M. E. Sharpe 2006).

In additon he served as Series Editor for the Greenwood / ABC-Clio Seven-volume Series The American Dance Floor - of the following titles:

Throughout the years, he has also served in a volunteer capacity with many Staten Island organization fundraisers including, Snug Harbor Children's Jump-fest, the Broadway YMCA's Aerobathon, Fitness Fest and Invest In Youth Campaign, the Bill Welsh 5K Run for the New Dorp High School Track Team, the Staten Island Recreation Association, Relay for Life, and Making Strides for Breast Cancer Awareness Walk for the America Cancer Society. In October 2000, the American Cancer Society recognized him with a Five-year recognition for "Distinguished Voluntary Leadership in Saving Lives from Cancer."

He has presented papers and lectured nationally at:
• the American Studies Association in Hartford, Connecticut in October 2003; the Midwest Modern Language Association in Chicago, Illinois in November 2003; and at SUNY New Paltz, on the study of the nature and dynamics of the arts on the presentation of the issue of Domestic Violence through songs by contemporary female musicians such as the Dixie Chicks.
• February 2001 at The National Association of African-American Studies, in Houston, Texas he presented a study of racial prejudices through the use of song and film references titled: "That Ol' Man River, He Must Know Something!"
• The National Association of Hispanic and Latino Studies, in Houston, Texas February 2000 titled: "Hey Pachuco! That Zoot Suit Can Cause a Riot." A study of the stereotyping and racial defamation endured by Latinos in Los Angeles Zoot in 1943.
• The English Studies Conference at the University of Rhode Island in both October 2000 and October 1999 titled: "Hey Rosa Parks, You Have Made History!" A contemporary study of the Hip-hop references of Rosa Parks in song.
• The College English Association in Charleston, South Carolina in October 2000 on a study incorporating the use of popular culture to study the historical past to stimulate the learning process of current day college students.
• The New England Historical Association Fall Conference at Suffolk University, in Boston Massachusetts, October 1999 on "The Music of the Second World War: Sixty Years Later and Still Swinging!"
• International Conference West European Studies, at the University of Indiana in February 1999 titled: "Cold War Culture: Film, Fact, and Fiction. The Changing American Public Opinion of Josef Stalin from 1939 to 1949."

In March of 2007 he lectured at the Middle Atlantic American Studies Association at the University of Maryland in Baltimore County on "He's the Greatest Dancer! George Washington and the American Colonial Minuet," In April of 2007 Mr. Giordano spoke at the American Cultural Association / Popular Culture Association in Boston, Massachusetts, "Satan in the Dance Hall: Social Dancing and Morality in 1920s New York City," which is also the title of his next book project. In April 2007, Mr. Giordano was an invited guest speaker to discuss his book Social Dancing in America at the Spring Salon Talk at the City University of New York – CUNY Graduate Center sponsored by the New York-Metro American Studies Association.

Some of his architectural designs have earned Building Awards from the Staten Island Chamber of Commerce including Excellence Awards for Natural Beauty, Exterior and Interior Design, and an Excellence Award for ADA Accessibility for the Disabled. He is an advocate of combing scholarship with exercise as evidenced by his commitment as a recreational runner and has completed 15 New York City Marathons, most recently in 2018. In 2013, he ran the NYC Marathon side-by-side with his son Jonathan, as he also did in 2008. 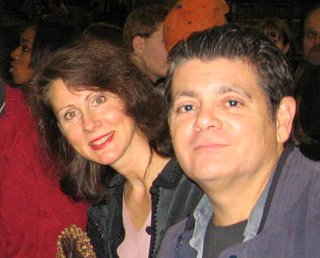 The author and his wife Thelma Lynn Olsen

The author and his wife swing dancing at a dinner dance in Staten Island, New York.

The author Ralph G. Giordano with his sons Matthew (left) and Jonathan (right).

Ralph G. Giordano and his son Jonathan at the start of the 2013 NYC Marathon.

The author and his son Matthew (who contributed an essay to Pop Goes the Decades: The Fifties," in Georgetown on the "Exorcist" steps. 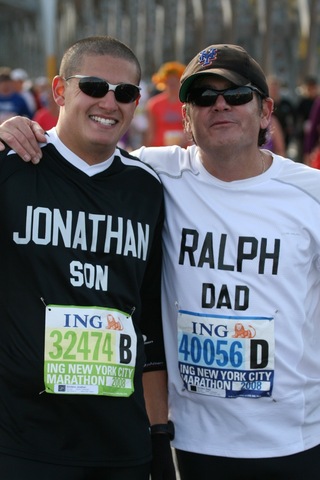 Ralph Giordano and his son Jonathan Giordano during the 2008 New York City Marathon.