“Thank you for the interesting book. I enjoyed reading about Mr. Straton, whom I had never heard of.” Michael Pollak, The New York Times

Editorial Reviews
• Describes a huge cultural phenomenon focusing on the debate about the morality of social dancing. (Foreword Reviews, January 2009)
• This is a book of amazing revelations, leaving no doubt that jazz culture was more threatening than punk. (Djhistory.Com, Fall 2009)
• An in-depth examination of the clash between morality and modernism in New York City in the 1920s. (Zentralblatt für Geologie und Paläontologie, March 2009)

For the historical influence of the book, you can read the article “Satan in the Dance Hall” written by Gregory Mason in H.L. Mencken’s
American Mercury Magazine May to August 1924
At:

DESCRIPTION:
Satan in the Dance Hall explores the overwhelming popularity of social dancing and its close relationship to America's rapidly changing society in the 1920s. The book focuses on the fiercely contested debate over the morality of social dancing in New York City, led by moral reformers and religious leaders like Rev. John Roach Straton. Fed by the firm belief that dancing was the leading cause of immorality in New York, Straton and his followers succeeded in enacting municipal regulations on social dancing and moral conduct within the more than 750 public dance halls in New York City.

Ralph G. Giordano conveys an easy to read and full picture of life in the Jazz Age, incorporating important events and personalities such as the Flu Epidemic, the Scopes Monkey Trial, Prohibition, Flappers, Gangsters, Texas Guinan, and Charles Lindbergh, while simultaneously describing how social dancing was a hugely prominent cultural phenomenon, one closely intertwined with nearly every aspect of American society from the Great War to the Great Depression. With a bibliography, an index, and over 35 photos, Satan in the Dance Hall presents an interdisciplinary study of social dancing in New York City throughout the decade.

Satan in the Dance Hall, by Ralph G. Giordano (247 pages, November 2008), is an in-depth examination of the clash between morality and modernism in New York City in the 1920s. Although the focus is primarily on the long-forgotten crusade of Calvary Baptist Church preacher Rev. John Roach Straton against social dancing in public dance halls, Giordano’s wide-ranging cultural survey encompasses the Spanish flu epidemic, Prohibition, the flapper image, jazz, the Scopes trial, eugenics, and the influence of the Ku Klux Klan. Unlike its flamboyant portrayal in cinema, the 1920s Jazz Age was a morally restrictive era characterized by a rise in fundamentalism. Just as Jerry Falwell blamed the 9/11 terrorist attacks on New York secularism, Straton saw God’s hand in the 1906 San Francisco earthquake and predicted New York’s doom in 1929 “like that of the wicked cities of the past unless the city mends its ways.” $49.95. Scarecrow. 978-0-8108-6146-6. 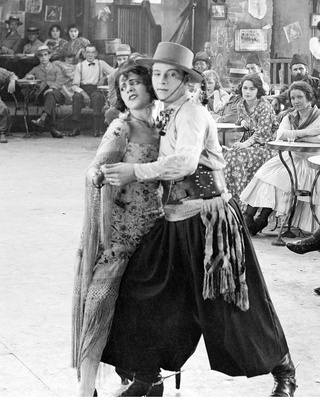 Rudolph Valentino dances the Tango in the movie "The Four Horsemen of the Apocalypse" (1921).

Satan in the dance hall about to claim a young woman and her social dancing partner for condemnation to hell and appears in Thomas A. Faulkner’s From the Ball-Room to Hell, 1920 edition, page 11.
Loading…}