"Who would have thought that the topic of social dancing was so complex and nuanced or that it is so interesting? This beautifully composed, stylishly written examination of the social value of public dancing, as well as its function in reflecting changing values, begs to be read start to finish.
The first chapter in volume 1 provides background on the history of social dance and American dance to 1740. The remaining four chapters cover the years 1740–1820, 1820–1865, and 1865–1900. Volume 2 is divided into seven chapters treating categories of twentieth-century dance, including the Charleston, swing, disco, and break dancing. Each chapter begins with a section on the political, cultural, and social climate and goes on to cover the dances themselves, followed by the venues where dancing typically took place. The discussions are deep and far ranging, dealing with political and religious controversies that dancing either expressed or stirred up. The text is laden with quotations from primary source material, and sidebars contain some choreographic information, such as diagrams and verbal instructions for the longways set and the quadrille. Highly informative black-and-white period reproductions and photographs extend the text perfectly. For example, photographs of both the Charleston and the shimmy shed light on the contemporary outrage over these dances. Both volumes conclude with bibliographies and detailed volume indexes. In addition, volume 1 has a “Select Bibliography of Online Dance Instruction Manuals Available from the Library of Congress,” while volume 2 contains a “Select List of Hollywood Movies by Dance Type.”
This fascinating and readable work is suitable for any large performing-arts collection as well as collections on social history. It is a worthy companion to Maureen Needham’s I See America Dancing (University of Illinois, 2002), which covers much of the same turf using primary source readings."
— Ann Welton

Social Dancing in America is the most comprehensive collection of American social dance from the first settlements in 1607 through the birth of the nation in 1776 and into the beginning of the 21st century. Fair Terpsichore to the Ghost Dance is part of a two-volume companion set that not only describes the dances, but also why Americans danced. Those influences included the Native American Indian, Spanish, Caribbean, African, European, and other ethnic cultures that created original American social dances such as the Lindy Hop, Rock ‘n’ Roll, the Twist, Disco, Breakdancing, and Hip Hop. Social Dancing in America is also a celebration of the American spirit embodied among everyday individuals as they danced for fun, recreation, and family celebrations such as weddings.

During the twentieth century, social dancing in itself offered a parallel of the social, economic, and cultural traditions of each particular time period. For example, segregation and the “Jim Crow” mentality was cemented in place all over the United States and for most of the century dancing and dancing halls were strictly segregated. Segregation forced a mass migration from the south to northern cities and with it a transformation of the Delta Blues music into an American original--Jazz. Jazz gave birth to the Charleston Dance, as well as evolving into swing music and the Lindy Hop. In the latter part of the 20th-century, with the technological advancement of television, shows such as American Bandstand, Soul Train, Dance Fever, and eventually the MTV generation greatly influenced dance styles and the current “new” trend in dancing such as Rock ‘n’ Roll, Freestyle, Disco, Breakdancing, and Hip Hop.

“Social dancing has never enjoyed the cachet conferred on ballet or other theatrical dance forms, sometimes even when it comes to reference books. That is about to change with Giordano's comprehensive study of the subject spanning the centuries in the context of American social history. Volume 1, subtitled "Fair Terpsichore to the Ghost Dance, 1607-1900," illustrates the part social dancing has played in Americans' lives. It also contains the “Select Bibliography of Online Dance Instruction Manuals Available from the Library of Congress.” Volume 2, subtitled "Lindy Hop to Hip Hop, 1901-2000," continues the story, connecting social dancing to societal developments throughout the 20th century. The text is enlivened by numerous illustrations, including sheet music and dancing manual covers, contemporary images, and period photographs. Each volume features an extensive bibliography. The popularity of television programs such as Dancing with the Stars (ABC) and Championship Ballroom Dancing (PBS) and the general resurgence of interest in ballroom dancing make this straightforward, detail-packed, and readable work an appropriate choice for public and academic collections.” [Available as an e-book: ISBN 1-56750-991-6 .-Ed.]-Carolyn M. Mulac, Chicago P.L.” (March 1, 2007 Reference; Pg. 108)

An illustration from 1725 of the Minuet from Pierre Rameau’s in Le Maître à Danser, (trans. The Dancing-Master). (122 KB)

A re-enactment of English-country Dancing. 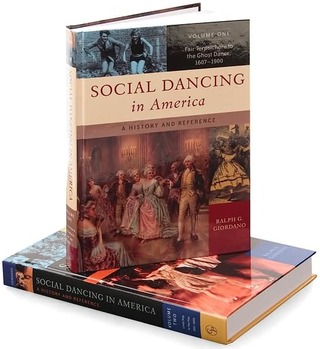 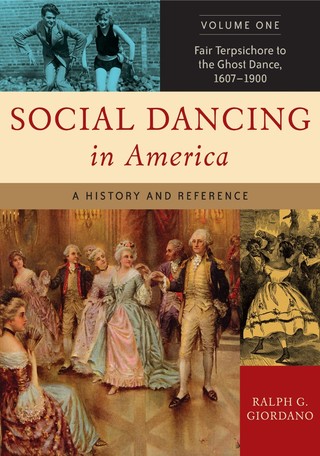